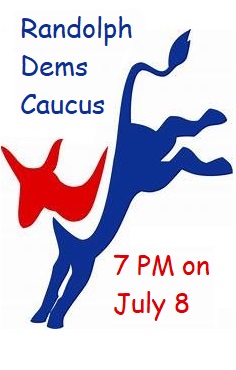 
Click here for original article in the Randolph Journal-Sun, July 1, 2021

Randolph is about to have a well-hidden exercise in democracy -- in which you can participate and make it less well-hidden. During July, the Democratic Party and the Republican Party will hold caucuses across the state, including two in Randolph, at which delegates to the statewide conventions will be selected. Those delegates will then write the party platforms for the next four years.

The Randolph Democratic Town Committee will hold a virtual caucus on July 8 at 7 PM (Zoom link below), to decide who Randolph will send to the Democratic State Convention, which will be held in Lowell on September 25. This process traditionally favors "party insiders" who know about the caucus and who attend with their friends to vote for them as delegates. But knowing the rules -- outlined here -- allows anyone to attend, and could make the process more "grass roots."

This year the caucuses will be "virtual" (some towns will hold "hybrid" in-person plus virtual) but traditionally the caucuses are held at Town Hall or other public locations. The doors at the caucus are traditionally locked at the appointed hour, so you must arrive on time – for the virtual caucus, just Zoom in on time, and announce yourself so your party registration can be checked.

"Last year we cancelled the caucuses and the Convention for COVID," says Randolph Democratic Town Committee Chair Jesse Gordon. "So this year we're transitioning back with a virtual caucus to elect delegates, and then a hybrid Convention, in Lowell and also on Zoom. Come join us and get elected to the Convention -- it's fun! -- and call me if you have trouble registering as a Dem, or joining on caucus day." The Randolph Dems will have a "Zoom master" to ensure against technical troubles, and two Democratic State Committee members present to ensure that everyone possible can participate.

This is how the Democratic caucus elects delegates: Half of the delegates are set aside for men and half for women. Anyone can nominate themselves or someone else to be a delegate. There is no limit on the number of people who can be nominated. Once the nominations are finalized, every registered Democrat attending the caucus votes for delegates, by a list in the Zoom chat, or by texting the Chair (votes are public, not secret!). Randolph is assigned 23 seats at this year's Democratic Convention, so you can vote for up to 23 delegates. People who want to run for delegate, but cannot attend the caucus, may contact the Chair in advance and can then be nominated in absentia.

"We have rules for gender balance and also provisions for gender-nonbinary individuals," notes Gordon. "We also have additional 'add-on' delegate seats available for diversity representation at the Convention -- the diversity criteria are: under-represented race; sexual orientation; disability; and youth." Gordon doesn't expect to have more than 23 candidates run for delegate seats, "but we've seen higher attendance at virtual events, and we'd be thrilled to have a competitive caucus," says Gordon. If the nominations exceed 23 candidates, each person will have the chance to make a two-minute speech, to state their qualifications. If there aren't 23 candidates, the election will be by acclamation instead of by voting, and the remainder of the caucus will focus on how the Convention and the platform-writing process works.

Delegates will vote at the Convention on amendments to the party platform -- that's the document defining the party's official issue stances, until the next "Platform Convention" in 2025. There'll be workshops in advance of the Convention where delegates can help write about issues of interest. "Delegates can also organize to introduce new platform ideas, says Gordon, "like my colleagues did in the past with the 'Mass Scorecard,' where we scored every state legislator comparing their votes with the party platform. We introduced a resolution at the Platform Convention and we won -- that was real fun!"

This is democracy at work. You can earn yourself the right to complain about the system for the next few years by spending one day at it on July 8, and maybe the process can become more grass-roots and participatory while we're at it. The Randolph Republicans will hold their caucus later in July – contact Jean Riguel Ulysse at 508-649-0971 or ulyssejeanriguel@gmail.com. For readers outside of Randolph, check MassDems.org or MassGOP.com for when your caucus will be held. For the Randolph Dems: